Clouds of amazing shapes and colors, quickly moving from the mountains to the sea. That’s what comes to mind when I think back to my trip to Paklenica National Park. I came for climbing and hiking and left with so much more.

Intriguing about the park is this enormous difference in height over a very short distance. Highest point is about 1750 meters and lowest obviously zero at sea level. This unique feature makes that the weather changes rather quickly. Resulting in these beautiful clouds.

The area of the park has a long and rich history, with the first sign of human inhabitation going back to the mesolithic era (15.000 – 5.000 years ago). Over time different groups of people inhabited this area. What impressed me most were the glass bottles that were found in the vicinity of Starigrad, dated to the 4th century. If you’re interested in seeing them they are now in the Zadar Museum of Archaeology.

On October 19th, 1949, Paklenica was declared a national park. Since then it also became Unesco Biosphere Reserve, Natura 2000 Site and Unesco World Heritage Site. I think this proves that this is a place you must see.

In 1991 this area was hit by war, which lasted till 1995. Nowadays it’s hard to imagine that it happened, but there are some places that remind you of what went on in this area. Some mine fields are still not completely cleared. For me seeing the signs made me suddenly so aware that it gave a completely different meaning to the hike I was doing. 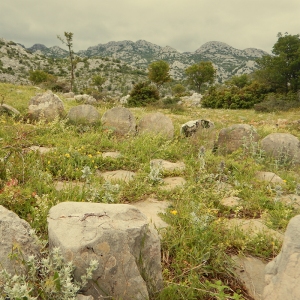 I decided to drive from the Netherlands to Croatia. It took me two days and I had to cross four borders to get there. However I enjoyed that I had all my gear with me. When you plan to drive too, keep in mind that you have to get a vignette for Austria and Slovenia and pay toll in Croatia. You can order the Austrian online, the Slovenian has to be purchased at places like gas stations in one of the neighbouring countries. The fines if you don’t have them are crazy.

It’s also possible to fly into Zadar and take a bus to Starigrad. The town next to the national park is small and offers grocery stores and restaurants. So it’s easy to do everything on foot once you get there. Also the hike into the park is not that long, in half an hour you’re in the centre of the climbing area.

There are many options for staying close to the park. The town Starigrad Paklenica is the closest town, it offers campsites, apartments, B&B’s and even hotels. I decided to stay at camp Marko, it’s close to the park, not straight on the busy road and has a kitchen with sitting area. 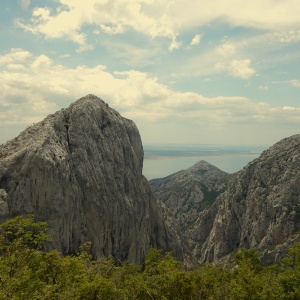 The park has one official visitor center, found at about 2 km from the entrance station of the park. It’s in an old bunker buried in the mountain. I went through it one day and I didn’t really notice it was the visitor center.

I learned most about the park in the national park campground. The campground shop sells a map of the park, climbing topo and many other memorabilia. Close to there, next to the sea, a bunch of information signs about animals, plants and history of the area are placed. All translated in English. I learned there about the glass bottles that were made there so long ago. It amazed me that they knew about glass in that time.

The only way to really explore the park is by hiking on a nice variety of hiking trails. Some easy, some more difficult, but all trails that I’ve been on aren’t too technical. Popular hikes are towards the huts Lugarnica and Paklenica and towards the Manita Pec cave. All these sites are on the map of the park. It can be bought at the NP shop or the outdoor shop.

The last hike I did made a huge impression on me. I drove to the north side of the park and drove all the way up a dirt road to the start of a hiking trail towards the highest peak in the park, Vaganski Vrh. I parked my car at an altitude of about 1200 meters, I put a link to the location in the list of websites, also the road is on the hiking map. I wasn’t planning on making it all the way to the peak of 1757, and I didn’t. But that area out there is so stunning, it’s so worth checking out. 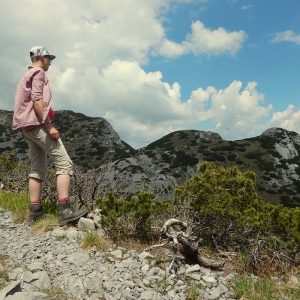 Another way of seeing that part of the park is doing a multi day trek. Throughout the park there are four places that you can spend the night at, camping is not allowed. You can stay at the manned Paklenica mountain hut or at one of the three shelters. The shelters don’t offer much, but you can sleep inside. I ended up not doing this, since there were so many other things I wanted to do. Now I wish I did it anyways.

I haven’t participated in any of the programs, but the park has a few things to offer. At this time on their website they are offering a bird watching program, an interpretational guided hike and a lecture. I believe there’s also a guide in the Manita Pec cave. I found this information in the pricelist on the National Park website.

What else to do

The national park is very popular with rock climbers. As soon as you enter the park you can see people out on the rock. If you have no experience with climbing you might want to give it a try. I believe there are some organizations who offer a rock climbing introduction course, Paklenica Adventurist is offering a 2 hour course. If you are actually a climber, then please check out my post about climbing in Paklenica.

Of Course this park is at sea, so a day at the beach or on the water is also a great idea. I’ve seen kayak tours being offered in town. I’m not sure if you can just rent a boat.

One Reply to “Paklenica National Park – a visit”