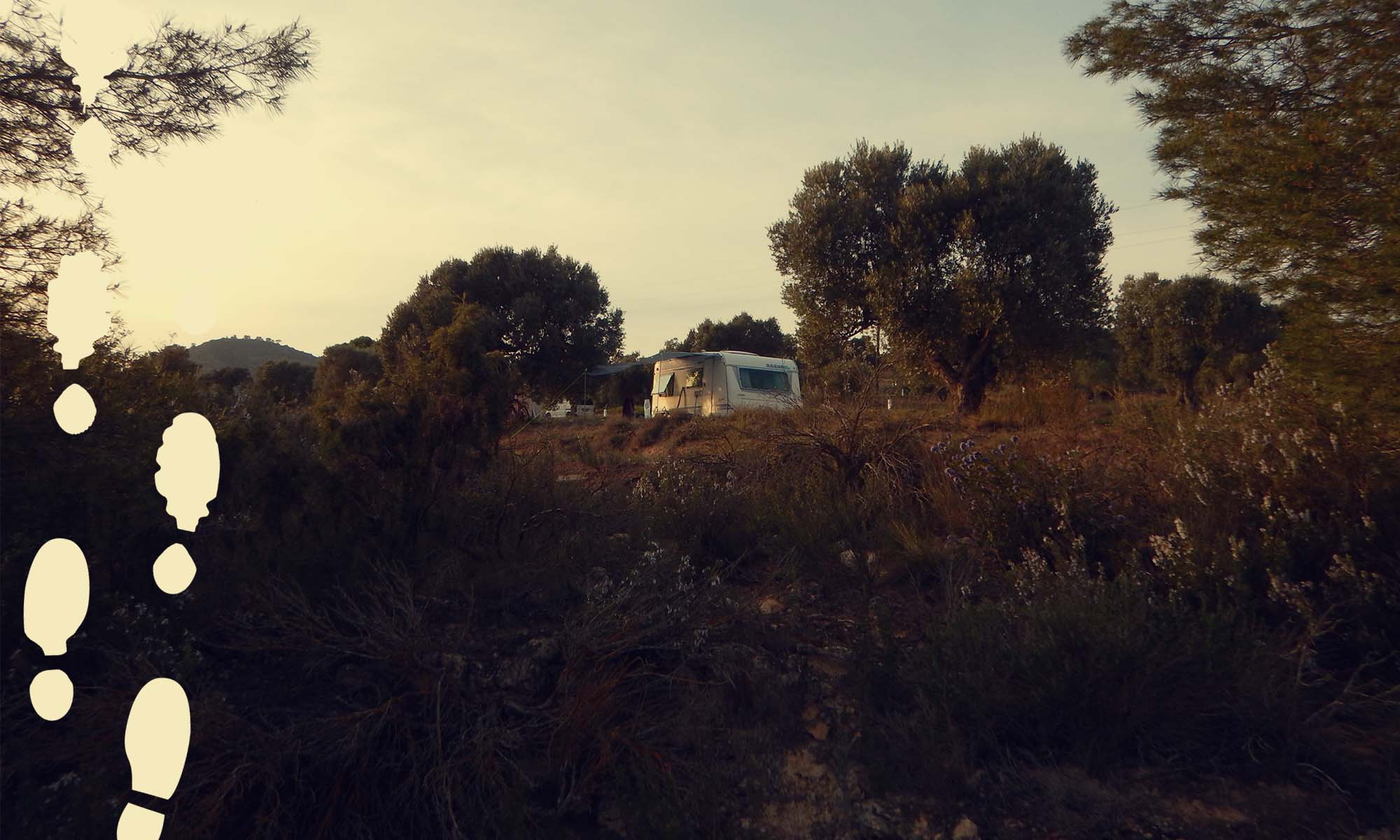 When I was looking for the best way to live for me, my focus was initially on tiny houses. It was hip and seemed like a solution that suited me. But one part scared me the most from taking this step. If you properly implement the idea of a tiny house on wheels (that’s what I was focused on) then you live completely off grid. You do not use the network to which all regular homes are connected.

So no electricity, no running water and no sewer.

Especially the idea that it is not possible to take a nice warm shower if you feel like it was a huge disappointment to me. That is why I ultimately chose a life on campsites in my caravan. Until I decided to travel with my house and stay with Workaways. The second workaway I chose was an olive and almond orchard. The profile did say something about electricity from solar panels. But it didn’t really ring a bell.

Until I got there and was installed. No, my caravan couldn’t be hooked up on electricity. The water supply was running low, so be careful with that. There are compost toilets, you can also use the normal toilet, but then put the toilet paper in the bucket and rather not flush after just a pee. And oh yes, if you shower indoors don’t use soap

You could say I was overwhelmed. I bombarded that man with questions about how and why. Part of his reasoning I disagree with, another part I have no idea whether it is correct and then there is also part that I agree with.

A set of eight solar panels charges a one-by-one-by-one battery that can hold up to 28 volts. He said that he does not want the battery to drop below 24 volts because of the life of the battery. On cloudy days, just as when I arrived, the house consumes more power than the battery can be recharged. My caravan also connected to this, which would then run an extra refrigerator and sometimes my boiler and electric heater was not an option. Fortunately, my caravan also has a solar panel with a small battery, so lighting in the caravan was no problem. The biggest challenge for me in the field of electricity was that I couldn’t charge my phone in the caravan. Because we were so in the middle of nowhere, the battery of the phone was drained very quickly due to the bad connection.

In the seven summer months, water from the river is pumped into this area so that everyone can water their olives and almonds for a good harvest. This water is stored in a very large tank for the five winter months, I have forgotten exactly how much you can put in. On top of the hill there is also a small tank of 1000 liters or something. With an electric pump (if it is sunny enough) water is pumped to there from the large storage. This way you have enough water pressure to take a normal shower. The water company never announces when the water is being connected or disconnected. As a result, they had to do with 30 cm less water last winter than they could. When I arrived there was still about 20 cm of water in the storage tank, so we had to be very economical because it could take another month for the water to be connected again.

The wastewater from the house goes to a septic tank somewhere on the property. I didn’t know much about septic tanks, but I quickly read myself up. The wastewater is collected there and is a simple waste water treatment. The excess water flows into the ground via two steps. This man is convinced that the bacteria that ensure the breakdown process die from soap. So I was not allowed to wash my hair and body in the shower in the house with soap. Also do not rinse greasy plates in the kitchen, because then you get a greasy layer on the water in the tank. I don’t understand at all about his reasoning and I couldn’t find any substantiation for this on the internet. He wants to avoid having to empty the tank (solid parts), but now almost nothing ends up in the septic tank. You already use the compost toilet. The washing-up water is thrown into the garden. If you take a shower with soap, there is an outdoor shower where the water runs straight into the ground. And I believe the gentlemen are just peeing against a tree somewhere.

As you can read a lot of indignation and frustration on my part. Yet three weeks of living in this way has given me new insights. Washing myself from head to toe with just a little bit of water is not at all as annoying as I thought. I feel as clean afterwards as after a shower. I already washed my hair once a week and I still do. In the future, when I no longer live in my caravan, I want to look at the possibility of a compost toilet. I like it very much and I noticed how much water you can save with this.

Living completely off grid really doesn’t suit me, but there are great lessons to learn if you do this for a few weeks.

Since living in the caravan I have been economical with water and electricity, but in the field of water use I have now taken a big step. I recommend giving it a try, you only see how luxurious your life is when it is suddenly all gone.

One Reply to “3 weeks off grid”